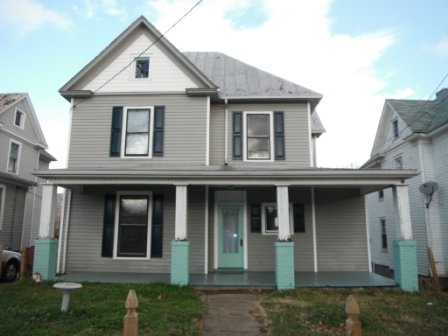 The Grasty home is located in the Old Southwest Historic District on a busy thoroughfare in Roanoke. The 1915 wood frame construction covers 2200 square feet. This older home had minimal insulation and experienced air leakage at doors and windows and at plumbing, electrical and HVAC penetrations.

The furnace, heat pump and water heater however, appeared to be in good condition. The furnace and heat pump were less than two years old and working well. The gas water heater was drafting properly and wrapped with an insulation blanket.

During the energy assessment the blower door reading showed air leakage almost four and a half times greater than the recommended rate – equivalent to a six square foot hole in the home. Other issues included roof, electrical and thermal envelope concerns. The roof was in poor condition and needed repair work. Some knob and tube electrical wiring was found and had to be removed prior to insulation work. The first floor bathroom required underside insulation and ductwork and plumbing brought into the thermal envelope.

The energy retrofit team first addressed roof issues by sealing the bands, top plates and diaphragm framing. Insulation of the attic was done next by coating ceiling and knee walls with a blanket of open cell spray foam. Some windows were reconditioned and others sealed along with exterior doors, closet and attic access areas.
Ventilation system duct work was sealed and various repairs completed. The first floor bathroom was insulated on the underside and plumbing and ductwork brought into the thermal envelope.

The family now enjoys a more comfortable and healthy home as well as lower utility bills. All work was completed in accordance with cafe2 and Energy Performance Score. The Grasty’s also chose to have drywall installed over the new attic insulation creating the potential for future living space.

The Grasty Family can anticipate more than $880 per year in annual energy savings. The family was fortunate to qualify for a $10,000 FHLB loan and air sealing measures resulted in a ROI of 29%. The payback on the investment should be achieved in just over 11 years. Should the client want to sell the home in the future, the improved Energy Performance Score and increased value will be part of the MLS (Multiple Listing Service).