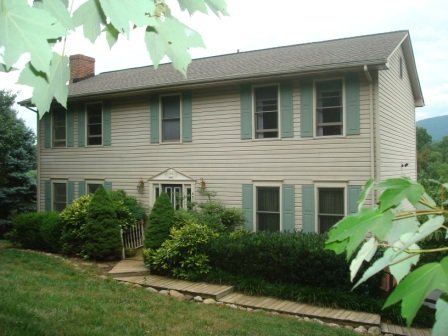 The 3,200 square foot brick Roanoke County home was generally in good condition and built with sustainability in mind. The builder installed abundant insulation in 1990 and oriented the home to receive passive solar radiation. The initial blower door test, however, measured three time higher than the reading indicating significant breaches in the building envelope.

The insulation did not meet Energy Star standards and gaps in it were causing heating/cooling inefficiencies. Water pipes, air ducts, the water theater and attach access panel were all in need of insulation. Numerous leaks around mechanical ducts, plumbing lines and exterior surfaces existed and weather stripping of exterior doors and the door at the garage entrance were in poor condition or nonexistent.

Two heating and cooling issues were creating other problems. The HVAC system was operating inefficiently and in need of a tune-up. The second problem involved a chase running for the ground to the attic creating an undetected air leakage problem. The thermometer in the chase was reading hotter temperatures in the summer and colder temperatures in the winter.

Blown-in cellulose meeting Energy Star standards helped reduce the stack effect in the attic. Air sealing performed at penetrations to interior walls connecting to unconditioned spaces, between the attic and living space and in the garage, greatly reduced air leakage. Sealing the garage area also prevented fumes from entering the home.
The cleaned and tuned HVAC system improved performance. A big surprise cam when the chase was capped and the thermometer in that area recorded temperatures with less variation throughout the year.

“Better Building Works provided the expertise and we felt confident their recommendations were addressing our needs to get the desired results. After the work was completed, we felt an immediate improvement in the house!” The house is now tighter and less drafty creating a quieter home. The temperature stays more consistent with fewer spikes. Work was completed according to Energy Performance Score Guidelines using a DOE approved energy model yielding noticeable improvements after the retrofit work.

The Boyle family will look forward to saving more than $750 a year in energy costs and living in a healthier and more comfortable home. The purchase of new air conditioning and heat pump systems with higher SEER ratings should provide additional energy savings each year.