People need to be healthy.  Whole empires have been brought down by sickness.  Disease and illness undermine other efforts of society — sapping our resources, shortening our lives, impeding our children’s development, lowering the productivity of our workforce, and even decreasing our military readiness.  To know the true cost of things, we need to know how they affect our health.

In Southwest Virginia, one kilowatt-hour of electricity costs about 11¢ on our monthly utility bill.  But, the pollutants emitted by power plants – the nitrogen oxides, mercury, sulfur dioxide, carbon monoxide and, above all, fine particulates (PM2.5) – are known to cause cardiovascular, neurological, and respiratory damage.  How much do we pay for that?  Spoiler alert: it’s more than any other region of the country.

According to the new EPA report on the Public Health Benefits per kWh of Energy Efficiency and Renewable Energy in the United States, those of us in the Mid Atlantic region pay 5.5¢ in public health costs for every kWh we generate.  This means we are currently paying a hidden 50% public health tax on our electricity use.  But, it also means that, if we were to lower our regional consumption by 500 gigawatt hours a year, it would pay back $27.5 million in annual public health benefits.

The 5.5¢ / kWh figure is the average of values given for our region.  As seen in the table below, the EPA provides both high and low estimates of BPK values.  It’s worth noting that the higher estimates for our region hover around 8¢/kWh.  Two standard “discount rates” are also listed, representing the range of uncertainty about future dollars. 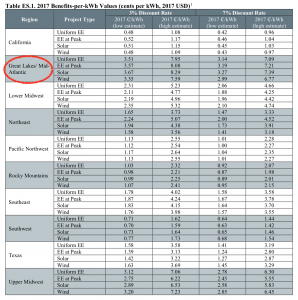 Unfortunately, the study does not address the health benefits of lowering our CO2 emissions, in spite of the fact that heat-related illnesses and vector-borne diseases are on the rise.  The public health cost of climate change has become a major concern in the health professions.  It could well turn out to dwarf the pollution-related numbers in the current EPA study.

The strength of the report is its deeper dive into different types of emission reduction programs and their benefits in different regions of the country.  Regional distinctions are important because of differences in fuel mixes, demand patterns, and the size of affected populations.  For example, an energy efficiency program in the Mid Atlantic yields 7-8 times more public health benefits than the same program in California, because the fuel mix in our region is dirtier.  Population differences explain why a program in the Southwest gets less bang for the buck than it would in the Northeast.  The report acknowledges that regions are not sealed off from each other.  One region’s benefits can affect, or be affected by, neighboring regions.  Note that some states, like Virginia, are divided between two regions. 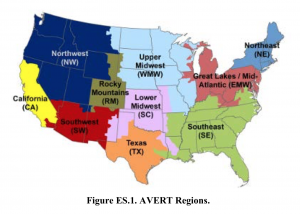 The type of program also makes a difference.  The EPA considers two types of renewable energy projects (solar, wind) and two types of energy-efficiency programs (uniform, at-peak).  Solar often scores better than wind because it generates power during higher-demand daytime hours.  On the other hand, if the fuel used to generate energy overnight is dirty, wind power could have more benefits.  Energy efficiency programs that focus more on peak load reduction have bigger benefits in regions with more pronounced peak periods (winter mornings up north, summer afternoons down south) and where peaker plants use dirtier fuels.

These BPK values are new and important.  We now have a simple tool to help us calculate the true payback and actual benefit of an emissions reduction program that might have an intimidating upfront price tag.  Elected officials and other decision makers will have more confidence that they’re doing the right thing for the people and the economy.  Let’s tell them to get busy!